When the Moon in Aries increases physical and mental activity, people become more impulsive, adventurous and enterprising, they manifested the desire to excel, increase the excitement. This is the period of spontaneous activity, which is characterized by the desire to immediately implement all born (more on impulse, than on reason) ideas and plans. At the forefront personal interests.

Increases the desire to impose its own will on others, which can lead to disputes, quarrels and ill-considered actions. Moon in Aries often enhances parental feelings. The children become more mobile, unruly and prone to ignore any orders and prohibitions. They have a growing interest in new, unexplored, and dulled the sense of danger.

When hard aspect to the planets moon people become more excitable, nervous, any delays or inconsistencies cause them anxiety and irritation. Much depends on with what exactly planets form an aspect of the Moon in the individual horoscope forecast of birth and the date of the general forecast.

Aries symbolizes the kind of fork in the road, and the life of the Moon Aries often marked by sudden changes. They often gain power are successful in business and politics. Aries Moon looks at life as a hunting instinct is seeking love, success and attention. In fact, the process of the chase is often more important than a trophy. Whatever was no sign of the sun, moon in Aries gives people quickness of mind, self-confidence and adventurous spirit permeating his whole personality, openness and unwillingness to submit to the demands of others. 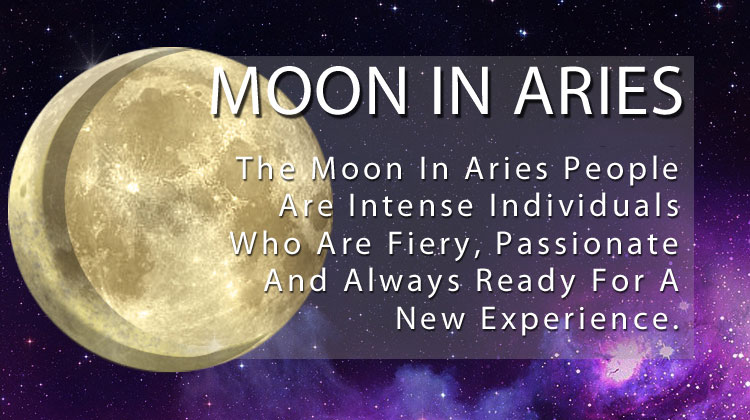 Aries – an active, hot sign, but the moon is cold and passive. This dissimilarity sharpens the senses, but also gives rise to nervousness. Moon Aries tend to be excited easily, quickly react to their surroundings, and never to doubt the adequacy of their feelings. Most of them believe in the correctness of its exceptional views and will ignore any objections. Their patience is running out fast. They always expensive time and they do not like to spend it on a careful study of detail, they have a tendency to rush ahead without thinking about the consequences beforehand.

In Aries the Moon gives his players the charm, liveliness, a special gift to seek from others what they need. Moon Aries love to talk (about everything) and confidently talk about many subjects. But their attention is quickly running out. With enthusiasm and energy, they often tend to abandon its goal if the goal requires hard and long work. They are able to change quickly enough benchmark, striving for something new and thrilling, forgetting about the old project. However, if the moon Aries is on the way to something really captured his soul, he will give it all his energy plan.

Moon in Aries Sign – Impact of the Moon Phase

New Moon in Aries – try with no one to quarrel. Any quarrel turns into a squabble, which is then difficult to pacify. Many conflicting couples that day thinking about the divorce and consider any such idea as the most correct.

Waxing Gibbous in Aries – if you are by nature not very decisive, that this day will be easier to prove his persistence.

Full Moon in Aries – people subconsciously are looking for a different sort of adventure and danger. Often, people are very worked up, but expect some trouble, but that are not ready for them. A growing sense of concern and anxiety.

Waning Gibbous in Aries – middle-aged people prone to violent memories of his youth and adolescence. Suddenly they start surrounding the "young" and act youthfully. Well, if their behavior is manifested in the form of a spark and enthusiasm, in the worst case they begin to act up and complexes, as teenagers. At this time, the Moon in Aries takes a while for all the solidity and seriousness.

Things to do under the Aries Moon

Moon in Aries contributes to the realization of all that is related to survival and helps maximize reveal inherent in every human qualities to manipulate matter to change his physical body. Try using the tips of his life cosmic rhythms. Perhaps they will help you to be less mistakes and wiser in their actions.

Aries – under the Aries Moon take care of your appearance and beauty guidance.

Taurus – under the Aries Moon get enough rest, allow yourself to relax.

Gemini – under the Aries Moon communicate with friends, make plans for future.

Cancer – under the Aries Moon be assertive in careers and achieve you goals.

Leo – under the Aries Moon expand horizons, visit the temple or go on a journey.

Virgo – under the Aries Moon requires compliance with the law, to deal with child support, taxes, and be sure to take the time to intimate contact.

Libra – under the Aries Moon develop personal and business relationships, as well as any communication with the outside world.

Scorpio – under the Aries Moon take care of your health, pay more attention to work and daily duties.

Sagittarius – under the Aries Moon go on a romantic date, flirt, make new acquaintances. Take time for creativity and communication with children.

Capricorn – under the Aries Moon take care of your family, talk to parents, get your home beautification.

Aquarius – under the Aries Moon communicate, conduct business negotiations, to prove yourselve, express thoughts and be sure to take a stroll.

Moon in Aries makes the sensitive head area, including – eyes, teeth, ears, brain. Do not give more stress on the eyes, avoid overheating in the sauna, as well as in the sun. Less reading and watching TV. Plastic surgery of the face and in the head contraindicated.

Who is particularly susceptible to headaches in the days of Aries feel not very good. As a prevention of migraine headaches during this period is recommended to drink plenty of clean water and coffee, and sugar shokoloda should be abandoned. Lotions on the inflamed or tired eyes during the days of Aries are very favorable. You can moisten the closed eyelids own saliva in the morning on an empty stomach before breakfast.

When the Moon is in Aries is best to avoid drinking alcohol, as well as to refrain from fasting and spicy food. Moon in Aries is favorable for the kidneys and bladder. Therefore, all the operations and procedures for the recovery of these bodies are recommended at this time.

In the days of Aries is better not to be cut, especially in the waning moon and the full moon day. When the Moon is in Aries, it is not necessary once again to touch the hair at all, better do not even comb. At this time, the hair is very vulnerable, and damage to them then it will be necessary for a long time to recover. If you repeatedly podstrizhetes in these days, your hair can become thin and brittle, start to fall and bald spots may appear.

Moon in Aries – is a good time to do smoothing the skin, peeling, deep cleansing, removal of papillomas, warts, ingrown nails. In the days of Aries, your skin will be responsive to the means of enhancing blood circulation – massage, tempering procedures, exercise for the muscles of the body.

Moon in Aries – barren time, any manipulation reduce productivity of plants, including weeds. Therefore, "to touch anything that should not bring the harvest and do not touch what is his to bear should. Loose, cultivate the land, to spray from pests, plant that grows rapidly and quickly consumed, collect what should long be stored without watering, fertilizing is not without weeding (weeds climb again very quickly).

Aries lunar days – the time to take care of the earth. The period of very favorable for: cultivation, weeding, spraying; collection of fruits and root vegetables; for landing that is growing rapidly and is used immediately, especially for lettuce, spinach, sugar beets, bushy beans, tomatoes; weeding, cleaning of paths, decorating a garden plot. Not a good time for planting and transplanting vegetable crops and flowers.