Halloween is traditionally celebrated on the night of October 31 to November 1, this time of sinister orange pumpkins and unexpected reincarnations. It is believed that this is the only day of the year when the spirits of the deceased return to Earth, because the boundaries separating the material world from the spiritual are dissolved. Many believe that on this day the veil to another world rises, so that it can be an excellent time for tarot divination.

The history of the celebration of Halloween is rooted in Celtic culture. In the calendar of the ancient Celts, October 31 meant the last day of the departing summer and the beginning of the winter (New Year). On this night it was believed that the doors opened between our and the other world. Inhabitants of the other world could penetrate to the ground and hunt for the living, and in order not to become a victim of spirits and ghosts, the ancient Celts put on the skins of beasts, and on the porch of the house laid out treats to appease the spirits.

On the same day there were sacrifices. Animals were burnt on the bonfires, and fire from them was considered sacred, they brought him into the house to sanctify him. And the well-known pumpkin is a symbol of Halloween, which symbolized the end of the harvest. Inside the pumpkin, a sacred fire was lit, which also repelled evil spirits that day. The tradition of celebrating this pagan holiday passed down from generation to generation, however, Halloween today has become much more modern than before. Henceforth, people do not make fires, and decorate houses with light bulbs and luminous figures in the yard, instead of hides they dress various carnival costumes and arrange noisy parties.

Halloween is celebrated in almost all countries today, it was greatly loved by adults and children. Everyone is eagerly preparing colorful and very scary costumes for the holiday, young people are happy to organize costume parties. One night in the year becomes a real carnival, which is ruled by terrible zombies, demons and witches. Bright make-up and carefully thought-out details of the decoration of the house and the created costume will make it very bright and cheerful to hold such a holiday in order to return to the real world in the morning with its troubles and worries.

Many before choosing a costume for Halloween try to see what the stylists and other experts say about this. Even astrologers make their opinion in choosing a dress, authoritatively asserting that the sign of the Zodiac is an internal state of man, to which one can listen in such a holiday. Some really try to find an image for the holiday, which would correspond to the zodiacal constellation of personality. So what are the dark sides of character in representatives of different signs of the zodiac and in what costumes should they be dressed? Choose an outfit that will allow you to demonstrate to the world that part of the personality that is usually hidden! 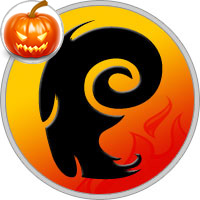 Demons — this is the highest caste of evil, you can say the elite. People even invented the science of demonology for themselves — to make it easier for demons to love. Aries also love everything, and everyone tries to attract the attention of the brilliant young Aries. If you correctly cast spells, Aries is flattered, and she, perhaps, will descend. But some are ready for the glory of Aries to make sacrifices — innocent, as a rule. So — do not do this. Aries and true demons — they will not be afraid of such hiccups, and they will not kill either. The young lady-Aries will simply provide an annoying admirer with an eternal stay in hell. 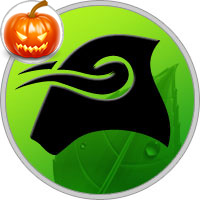 "You can not pardon execution" — this is about a vampire. And about Taurus. A vampire is an extremely attractive evil spirits: if a vampire decides that you are not only food, but also valuable fur, she will not suck you dry, but give immortality. Very peculiar immortality, of course, with a bunch of conditions: you will sleep in a coffin, lead a nocturnal lifestyle. For this vampire will allow you to love yourself. In the sense that the initiation of the victim forever binds the new vampire to the one who made him a vampire. In general, it’s like having a Taurus young lady: either you are food, or you are a slave. But if the slave is something with buns. And that, it’s fair! 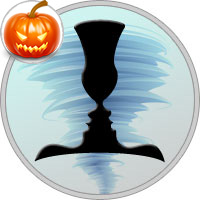 Everyone would like to become a werewolf, but only the Twins manage to do it. In fact, werewolf is not such a fun thing: werewolves do not turn into wolves, foxes or cats at will. They do not control it. The moon grows fatter — and forward: Twins flee into the woods, tumbling over the stump, grow their razor-sharp fangs and run someone to cut. For example, a sheep. Then they regret, ask forgiveness and behave decently — until the next full moon. What is most interesting, it is believed that the werewolf can be stopped by watering a potion or at least locked in the basement. Some sorcerers assured me that it could even be cured. Twins also regularly offer help in correcting temperament. The twins smile, nod, and think to themselves: "It’s a fool, is it? Who will refuse such a thing!". 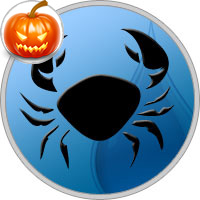 The witch, roughly speaking, is not at all evil, but only a man. But what a man! A woman who can command both evil spirits and humans-with the help of all sorts of potions and spells. This lady-Cancer, definitely. The personality of Cancer does not change, no matter what happens around and what Cancer does. And this person is always witch. In the sense that witches do not use their own magic. Witches use knowledge. Therefore, since the Holy Inquisition was abolished, the Cancers live peacefully and happily. "Who is evil, I am evil?" And you prove it! ". 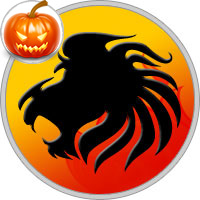 Lionesses, of course, do not exchange for trifles: if the Lioness is a man, then she is a queen, if the Lioness is evil, then she is the Devil. King and Grand Duke of all the Twilight. The queen, in the sense. It is believed that Lions adore when they are worshiped, but in fact it is not quite so. Lionesses adore when people leave the comfort zone and start moving their paws, achieving something — that’s the attention of the Lioness at least. And I must say, Lioness is supportive of those who try. True, it often turns out that the victim is not so unimaginative. What can I say: contacted the Devil — do not say then that you prefer a cool climate. 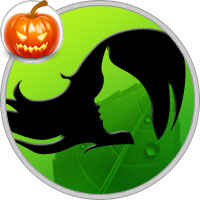 As soon as mankind learned to fear death, it immediately visualized it — well, so that it would be more convenient to be afraid. Death with a scythe — the most terrible in the world evil spirits, because from it there is no salvation. Nevertheless, there are many fairy tales in which the man managed to deceive Death. Well, for a while. It’s like with Virgo: instead of a scythe Dev has a sharp tongue, which they easily decapitate any objectionable one. You can deceive a girl, but you can not hide from her. Sooner or later, one way or another, the Virgin will return. He will sigh, he will stroke the victim on the head and say: "Well, I told you that it will be so!". 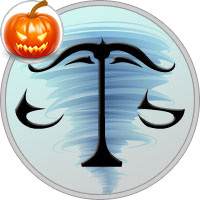 The dead bride, in fact, does not need much: she is not going to frighten anyone, she is just going to drag some nice unmarried friend into the afterlife and get married. And this is the whole essence of Libra. Usually they say that Libra are girls who do not know what they want, they need time to think that they adore sorting out options — well, and so on. In fact, Libra knows perfectly well what they want. They just wait for the right moment. A moment in which there are no options left. For the victim, of course, not for Libra. And while the victim by mistake did not put on the wedding ring on the wrong finger, Libra can enjoy: the dead bride is a very beautiful image. What you need forever aesthetic Libra. 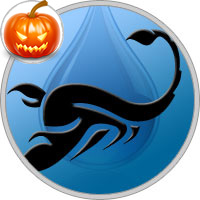 Succubus is a demoness who visits young men at night and causes them voluptuous dreams. The Scorpio mistress, of course, does not visit anyone with such a boring purpose, and who can sleep if Scorpio visits him? Another thing is that voluptuous dreams about Scorpio will pursue the lucky man to the end of his days, it’s true. And not only dreams. There is a legend about a young monk who met an unusually beautiful girl, and she promised him fame and fortune, if he agrees to be with her. The monk gave in to temptation and soon became an archbishop, then a cardinal, and after - Pope of Rome Sylvester II. A wonderful sense of humor was in the demoness. Just like the Scorpio. 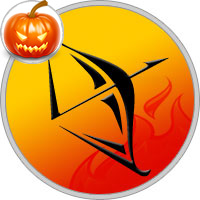 Ghost is a very delicate evil spirits really. Ghosts persecute no one and almost never leave their habitat. And by the way, ghosts will not mind if people put a sign on the "Haunted House" on this very place. Let them know! Let only the bold go! Sagittarius, too, all warn that it is very dangerous to contact them, but the one who has contacted will receive his adrenaline dose always. And those who wish are, naturally. Because Sagittarius, like ghosts, does not want anyone to be evil. They want to communicate, be friends and be photographed together for memory. 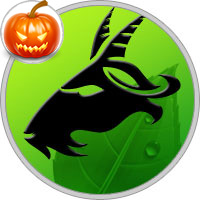 That’s all you need to know about zombies: you can not kill a zombie, because he is already dead; Zombies can not be stopped because the zombie does not feel pain; The zombie can not be persuaded, because he does not understand you; the zombie is eating brains. And a zombie really wants everyone around to become a zombie. Actually, in the end we get an exhaustive description of the Capricorn girl: if she has already chosen the victim, she will not stop until she reaches her delicious, sweet brain. Objections are not accepted, attempts to escape are stopped, pleas for mercy are vain. But after Capricorn has finished eating the victim’s brain, the victim realizes, finally, how to live, so that everything is right and right. In the sense — the victim will also become a zombie. 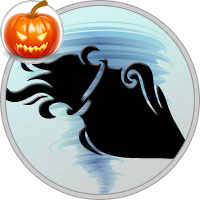 Aquarius — the same evil spirits, which has not yet decided whether it is evil or not. Therefore, Aquarius are Dark Elves. In general, if you think about it, any evil spirits somehow depend on people and even something they should - scare, for example. The public is waiting! Elves are such a special people: they are like people, only better. Beautiful, smarter, more talented, and so on. People next to elves feel so miserable that they dare to disturb the immortal people only in the most extreme cases. In general, this is what Aquarius needs: let them do what they want, let them worship and imitate, if only they do not get under their feet. 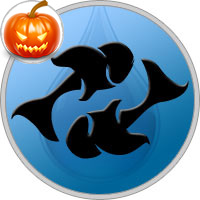 In children’s fairy tales, a mermaid is a beautiful girl with a fish tail. In adults, it’s a beautiful dead girl, a drowned woman. By the way, she does not have a tail, but she has a typical fish character. Like the young ladies-fishes, mermaids are sure that it is not the queen’s business to look for people and frighten people. They themselves will come and give it themselves. Yes, yes, if you came at night to a pond and want to live, you’ll have to pay off the mermaid. Water maidens prefer beads and beautiful dresses, you can not pay off a coin from them. And the kingdom of heaven is to him who dares to offer the Fish money. And not an arm, a heart, a house with a butler — well, dresses with beads, yes.