Gemini constellation is located in the northern hemisphere of the sky. Its name means “the twins” in Latin. The constellation’s symbol is ♊. Gemini is one of the zodiac constellations, first catalogued by the Greek astronomer Ptolemy in the 2nd century.

The constellation represents the twins Castor and Pollux (Polydeuces), also known as the Dioscuri in ancient times, in Greek mythology. Gemini is known mainly for its two bright stars, Castor and Pollux, the neutron star Geminga, and several notable deep sky objects, among them the open cluster Messier 35, the Eskimo Nebula, the Jellyfish Nebula, and the Medusa Nebula. 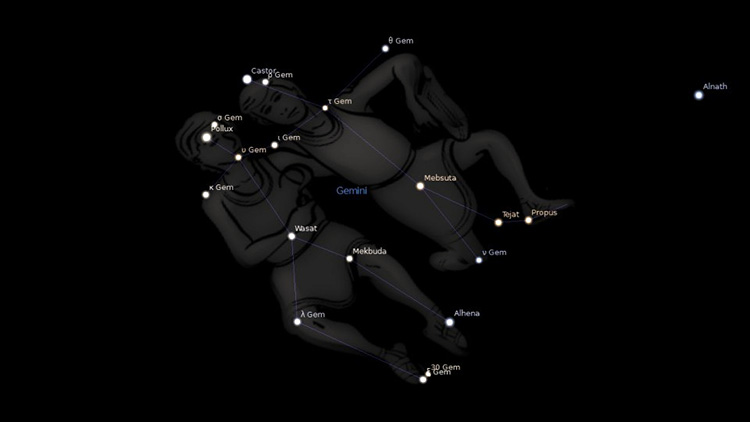 Gemini constellation represents the twins Castor and Polydeuces in Greek mythology. The brothers were also known as the Dioscuri, which means “sons of Zeus.” In most versions of the myth, however, only Polydeuces was Zeus’ son, and Castor was the son of the mortal King Tyndareus of Sparta.

The twins’ mother, Spartan Queen Leda, was raped by Zeus, who visited the queen in the form of a swan, associated with the constellation Cygnus (the Swan), and she became pregnant with Polydeuces and Helen (who would become the famous Helen of Troy). Leda later also became pregnant with Castor and Clytemnestra (who would later marry Agamemnon and eventually murder him and be killed by her own son Orestes). Castor and Clytemnestra were fathered by Tyndareus and, unlike Zeus’ children, they were mortal.

Castor and Polydeuces grew up together and were very close. Castor was an excellent horseman and proficient at fencing – he is said to have taught Heracles himself to fence – and Polydeuces was famed for his boxing skills. The two were part of the Argonauts’ expedition to get the Golden Fleece. Polydeuces’ boxing skills came in handy when Amycus, a son of Poseidon who ruled Asia Minor, refused to let the Argonauts leave until one of them fought him in a boxing match. Polydeuces accepted the challenge and easily won.

The twins came to the crew’s rescue on a number of occasions. They have been known as the patron saints of sailors, and were said to have been given the power to rescue sailors who were shipwrecked by the sea god Poseidon himself, who also gave them two white horses, which the twins often rode.

The Dioscuri are associated with St. Elmo’s fire, an electrical phenomenon that occurs during thunderstorms, when a coronal discharge from a pointed object in a strong electric field creates luminous plasma. The phenomenon is named after another patron saint of sailors, St. Erasmus of Formiae. St. Elmo’s fire would appear to sailors as a glowing ball of light during thunderstorms and they considered it as a sign that their guardian saint was with them.

Castor and Polydeuces eventually clashed with Idas and Lynceus, who were also twins and former Argonauts, over two women, Phoebe and Hilaira. The other two brothers were engaged to them, and Castor and Polydeuces carried the women off. Idas and Lynceus pursued them and in the end there was a fight between the four. Lynceus stabbed Castor with a sword and when Polydeuces saw this, he killed Lynceus. When Idas saw his brother die, he attacked Polydeuces, but Zeus intervened and sent a thunderbolt which saved his son. Polydeuces asked Zeus to share his immortality with his dead brother and the god placed them both in the sky, where they remain inseparable as the constellation Gemini.

The two brightest stars in the constellation, Alpha and Beta Geminorum, mark the twins’ heads. Not everyone identified the constellation as Castor and Polydeuces in ancient times. Hyginus and Ptolemy associated the two stars with Apollo and Heracles, who were half-brothers and both sons of Zeus.

How to find the constellation Gemini in the sky?

In terms of its shape, Gemini actually looks like two “human-like” figures holding hands, with its two brightest stars, Castor and Pollux, marking the positions of each of their heads. However, the outline of two young men might be less obvious from the southern hemisphere, from which vantage point their figures appear to standing on their heads.

Although Gemini is located in the northern hemisphere, this zodiac constellation lies along the ecliptic, which makes it visible to observers in much of the southern hemisphere as well. Consequently, Gemini is visible to anyone located between +90° and -60° of latitude, and is easily found to the northeast of neighboring Orion, between Taurus to the west and Cancer to the east, with Canis Minor lying to its south.