Leo constellation is home to the bright stars Regulus and Denebola, the nearby star Wolf 359, and to a number of famous deep sky objects, among them galaxies Messier 65, Messier 66, Messier 95, Messier 96, Messier 105, and NGC 3628. 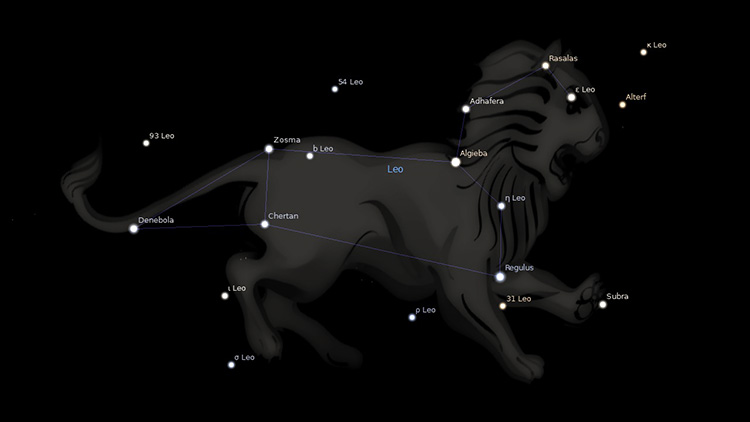 The Greeks associated Leo with the Nemean lion, the beast killed by Heracles during the first of his twelve labours. Both Eratosthenes and Hyginus wrote that the lion was placed among the constellations because it was the king of beasts. The lion lived in a cave in Nemea, a town located to the south-west of Corinth. It was killing the local inhabitants and could not be killed because its skin could not be pierced by any weapons.

Heracles could not kill the lion with arrows, so he trapped the lion in its cave, grappled with the beast and eventually choked it to death. He used the lion’s claws to cut off its pelt, and then wore the pelt as a cloak, complete with the lion’s head. The cloak both protected Heracles and made him appear even more fearsome.

How to find the constellation Leo in the sky?

Leo occupies an area of 947 square degrees, making it the third largest of the 12 zodiacal constellations, after Virgo and Aquarius. It is easily recognized as the majestic lion it depicts, while the grouping of six stars forming a backwards question-mark called the “Sickle” produces one of the night sky’s most striking asterisms, apart from the Big Dipper.

Leo is a northern sky constellation visible to observers between latitudes +90 and -65 degrees, and is simple to locate if you follow the Big Dipper’s’pointer stars‘ in the opposite direction from Polaris to an area where Leo can be found between Gemini and Cancer to the west, and Virgo to the east. Other nearby constellations include Hydra and Leo Minor, directly above Leo, as well as Coma Berenices, that is formed from the stars of thelion’s “tail”.

Leo is a winter constellation that is visible in the northern hemisphere from January to June, but rises to prominence around the time of the spring equinox in March. In the southern hemisphere, Leo can be seen during summer and autumn.