Pisces constellation lies in the northern sky. Its name means “the fish” (plural) in Latin. Pisces is one of the largest constellations in the sky. It is one of the zodiac constellations, first catalogued by the Greek astronomer Ptolemy in the 2nd century. Its symbol is ♓. Pisces lies between Aries constellation to the east and Aquarius to the west. The two celestial fish represent Venus and Cupid in Roman mythology.

Pisces constellation also contains a number of interesting deep sky objects, among them the face-on grand design spiral galaxy Messier 74 (NGC 628), the Pisces Dwarf galaxy, the double radio galaxy 3C 31, and the colliding galaxy pair Arp 284. The Vernal equinox, the point at which the Sun moves to the northern hemisphere across the equator every year, is currently located in Pisces. 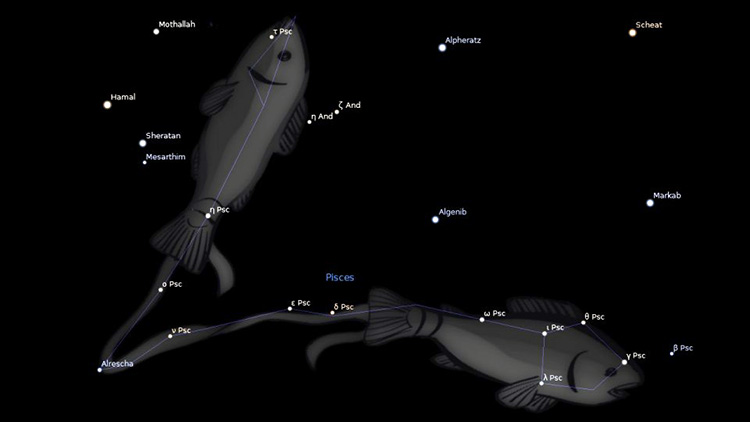 Pisces constellation is of Babylonian origin. The Babylonians saw it as a pair of fish joined by a cord. The constellation is usually associated with the Roman myth of Venus and Cupid, who tied themselves with a rope and transformed into fish to escape the monster Typhon. The star Alpha Piscium, also known by the traditional name Alrescha (“the cord” in Arabic) marks the knot of the rope.

The constellation is associated with a similar story in Greek mythology. After the Olympian gods had defeated the Titans and the Giants, Gaia, or Mother Earth, coupled with Tartarus, the region of the Underworld where Zeus held the Titans imprisoned, and they had Typhon, the scariest monster the world had ever seen. Typhon had a hundred dragon’s heads, with fire blazing from all his eyes.

Gaia sent Typhon to defeat the gods. Pan was the first to see him coming. He alerted the other gods and then transformed himself into a goat-fish and jumped into the river Euphrates to escape the monster. The goat-fish is represented by the constellation Capricornus.

The goddess Aphrodite and her son Eros called to the water nymphs for help and jumped into the river. In one version of the legend, two fishes came to the rescue and carried Aphrodite and Eros on their backs to safety. In another version, the mother and son were themselves transformed into fish.

How to find the constellation Pisces in the sky?

Pisces is a northern hemisphere constellation seen between latitudes +90° and -65°, and located in a region of the sky called “The Heavenly Waters”, or the “Sea”. The easternmost fish of the constellation can be found just beneath Andromeda, and the westernmost fish just below the Great Square of Pegasus, with the imaginary line connecting the two travelling southwards in the direction of Cetus.

Although the constellation is located in the northern sky, it is bisected by the ecliptic, meaning that it is visible from both hemispheres at different times in the year. From the northern hemisphere, Pisces is best seen in autumn, and in the southern hemisphere in spring. The ancient Greeks also welcomed Pisces as a sign of improving weather, of the two fish, one sees the end of winter, the other the beginning of spring.

Pisces is 14th largest constellations, taking up an area of 889 square degrees in the northern sky. In terms of its shape, the constellations looks like a large “V”, with a “circle” of stars on each end of the “V”. The base of the “V”, which is said to represent the cord that ties the fish together, is formed by the star Alrescha (Alpha Piscium). The Great Square of Pegasus seems to fit neatly into the “V” of Pisces, which makes finding the “fish” to either side of the Great Square easy.