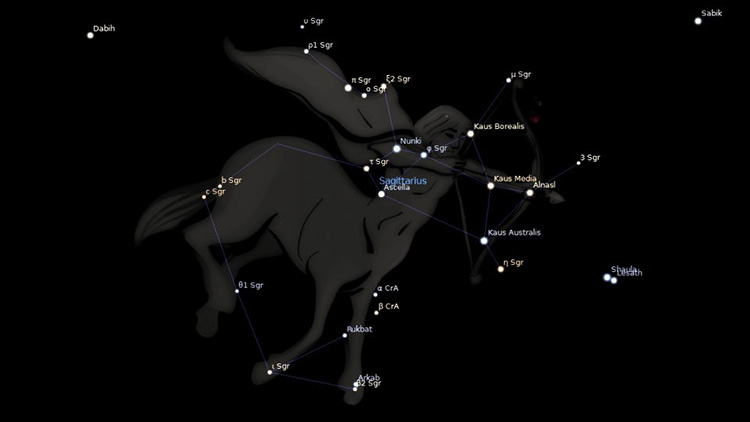 In Greek mythology, Sagittarius represents a centaur, a half human, half horse creature with the torso of a man and the body and four legs of a horse. The centaur is depicted as aiming an arrow toward the heart of the neighbouring constellation Scorpio, represented by the red supergiant star Antares. Sometimes Sagittarius is wrongly identified as the centaur Chiron, represented by the constellation Centaurus.

Sagittarius constellation has its roots in Sumerian mythology. Eratosthenes associated it with Crotus, a mythical creature with two feet and a satyr’s tail, who was the nurse to the nine Muses, daughters of Zeus. Eratosthenes argued that the constellation really represented a satyr and not a centaur. According to the Roman author Hyginus, Crotus was the son of Pan and the archer the constellation was named after. Crotus invented archery and lived on Mount Helicon. Because he was close to the Muses, they were the ones who asked Zeus to place him in the sky.

In Babylonian mythology, Sagittarius is associated with the centaur-like god Nergal, and depicted with two heads – one human and one panther – and also wings, and the stinger of a scorpion positioned above a horse’s tail.

How to find the constellation Sagittarius in the sky?

Sagittarius is the 15th largest constellation, taking up a an area of 867 square degrees of the southern celestial sphere, and can be seen between +55° and -90° of latitude. It lies between Capricornus to the east and Scorpius to the west, with other neighboring constellations including Aquila, Corona Australis, Indus, Microscopium, Ophiuchus, Scutum, Serpens Cauda and Telescopium. Sagittarius is positioned along the Milky Way, with the easiest way to locate the constellation by following an imaginary line drawn through the Summer Triangle stars of Deneb (Cygnus) and Altair (Aquila), and prolonging it a similar distance until it terminates at the famous Teapot asterism in Sagittarius.

From the northern hemisphere, Sagittarius is best seen during the months of August and September, which corresponds to spring in the southern hemisphere. However, from mid-northern latitudes, the constellation stays low in the south and never rises high in the night sky.

It takes a lot of imagination to see a centaur holding a bow, but with some effort, it is possible to make out the shape of a drawn bow armed with an arrow, the bow being represented by the stars Delta (Kaus Media), Lambda Sagittarii (Kaus Borealis), and Epsilon Sagittarii.