Notable deep sky objects in Virgo include the bright galaxies Messier 49, Messier 58, Messier 59, Messier 60, and Messier 87, the Sombrero Galaxy (M104), the Eyes Galaxies, the Siamese Twins, and the quasar 3C 273. 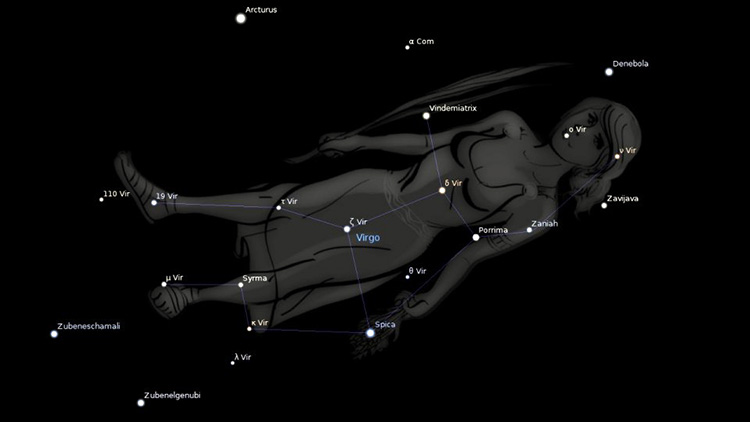 The constellation Virgo is usually associated with the Greek goddess of justice, Dike. Dike was the daughter of Zeus and Greek Titaness Themis. Virgo is usually depicted with angel-like wings, with an ear of wheat in her left hand, marked by the bright star Spica. She is located next to Libra, the constellation representing the scales of justice. Dike was also sometimes known as Astraeia, daughter of Astraeus, considered father of the stars, and Eos, goddess of the dawn.

In Greek mythology, Dike lived in the Golden Age of mankind. She was born a mortal and placed on Earth to rule over human justice. The Golden Age was marked by prosperity and peace, everlasting spring, and humans never knowing old age. When Zeus fulfilled the old prophecy and overthrew his father, this marked the beginning of the Silver Age, which was not as prosperous. Zeus introduced the four seasons and humans no longer honoured the gods as they had used to. Dike gave a speech to the entire race, warning them about the dangers of leaving behind the ideals of their predecessors and saying worse was yet to come. Then she flew to the mountains, turning her back on humans. When the Bronze and Iron Ages came and humans started warring among themselves, Dike left the Earth altogether, and flew to the heavens.

In other stories, the constellation Virgo is identified with Demeter, the corn goddess Atargatis, the Syrian goddess of fertility, and Erigone, the daughter of Icarius, who hanged herself after her father’s death. In this version of the myth, Icarius is associated with the constellation Boötes and the star Procyon in Canis Minor represents Icarius’ loyal dog Maera.

Historians Eratosthenes and Hyginus also associate the constellation Virgo with Tyche, the goddess of fortune, even though Tyche is usually depicted as holding the horn of plenty and not an ear of grain. The name of the star Spica, which marks the ear of grain held by the goddess, means exactly that, “the ear of grain” in Latin.

How to find the constellation Virgo in the sky?

Virgo takes up an area of 1294 square degrees, and is pictured as a winged, angel-like being holding an ear of corn. The almost-human like figure is depicted lying on its back, with the brightest star in the constellation, Spica, forming the left “hand”, the star Porrima forming the “chest and shoulders”, and Vindemiatrix forming the right “hand.” Seen from the northern hemisphere, the “head” is to the right of the outstretched arms.

Virgo is a southern constellation that can be seen by observers located between latitudes of +80° and -80°. To locate Virgo, remember the mnemonic ‘Arc to Arcturus and Spike to Spica.’ In other words, an imaginary arc drawn from the handle of the Big Dipper will lead first to the orange star Arcturus in Boötes, and then onto Virgo’s brightest star Spica. Virgo can be seen directly south of the constellation Coma Berenices, and immediately north of the constellations Libra, Corvus, and Crater.