Meaning of Name: The Scales

Libra, the 7th Sign of the Zodiac, is represented by the symbol of the Balancing Scales. Naturally, the buzzword here is ‘Balance’. Unsurprisingly, most Libra individuals are balancers – of varying degrees. Also, since a pair of Scales always has two aspects, two sides – Libra-born too has two sides to his/ her personality and thinking. Yet, unlike Gemini, the most Libra individuals don’t let this aspect rule their personalities. They are, rather, what you would call, as ‘the weighing options and then deciding (and picking the peaceful option) kinds’.

They value fairness and justice above most things, and are natural soothers and harmonizers. On their own, most Libras will steer clear of conflict or arguments, and would also not prefer to create or cause conflicts and disagreements. Owing to this trait, they make for good team players. Friendly, amiable and attractive, Libra individuals are also quite popular among their friends, more so because they tend to play able, trustworthy and balanced team strategists for their groups. However, many a Libra are found to be too manipulative or stubborn – for their own good.

They can be critical of others’ ways, fixed in their own or may be too manipulative; and, they can be quite difficult to manage, once they get into any of these modes. Good thing is that most Libra-born are able to effectively reign in this side of their personality, rather using the gift of tact and diplomacy to get positive results. In relationships, the Scales or Libra are very loving and careful. They make for beautiful, elegant partners, always well turned out, and are a treat to be taken along on dates, parties and social dos. Most Libra-born are graceful, polite and admire beauty in all its forms. They love a good life! 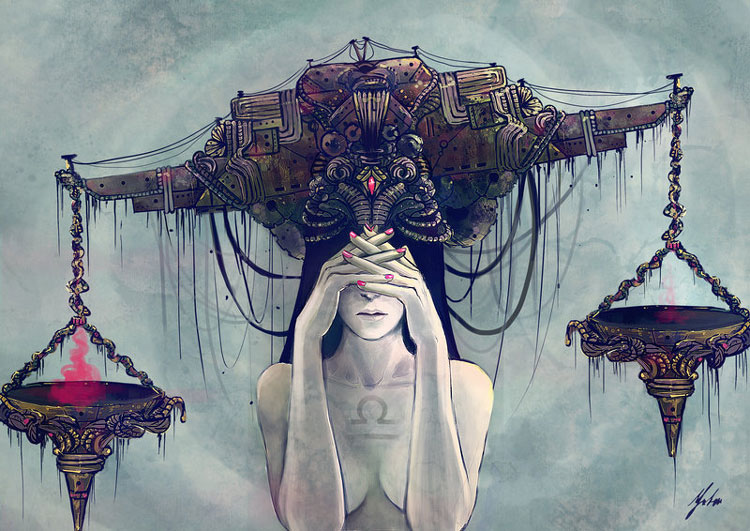 The symbol of the Libra horoscope sign is the scales, just like it is for justice and its personification Justitia. Justice is a question of balance, in some way, when facts and circumstances are to be judged properly. Balance is also a horoscope characteristic of the Libra Zodiac sign, who constantly strives to reach and maintain it.

Libra is also the horoscope sign representing the joining of two, not just in marriage, but in business, politics, and so on. The Libra astrological sign corresponds to the 7th House, which is about all such matters.

Venus is said to be the horoscope ruler of the Libra Zodiac sign, which means that the planet is particularly powerful in that sign. It also suggests that Libra’s quest for justice and balance is a benevolent one, although not always sensitive to different needs of others.

Mercury exalts in the Libra horoscope sign, so that planet, too, is enforced in this sign. In the horoscope, Mercury carries the ability to communicate and to pursue the thought stream of the conscious mind. These things are certainly necessary in the pursuit of justice.

When it comes to handle an awkward situation, Libras are the best. They are diplomatic and know how to manage the weirdest situations with elegance and style. Libras love peace and harmony and they often bridge the gap between people. They keep a principle in their mind and do accordingly. They are great hosts. They will not let you complain about their hospitability. Libras love adventure and excitement in life and they love traveling.

Libras are very self-indulging. When it comes to pamper themselves, they can forget the rest of the world. Sometimes, they get so carried away by themselves that it becomes very uncanny with others. Sometimes, you also may find them unreliable. They often act pessimistic towards life and its every aspect. You must notice that almost all Libras are reluctant to say their heart. They have the hardest time, when they are asked to make a decision. This often makes as the biggest turn off for others.

Balanced: As mentioned previously, they are the most balanced zodiac sign. Libra signifies balance and they rightly do justice to their name. If the Libras take a decision, you must know they will be the most balanced one and correct.

Charismatic: Libras are born charmers. Their magnetic appearance is the first trait, which you will notice in them. For this reason, they do not have to work hard to get noticed or recognized.

Diplomatic: Scale, as the name suggests, they are the most balanced of all. Whatever they do, they keep a close eye not to hurt anyone’s feelings in the due course.

Romantic: Libras are born romantics. When they are in love, they are the most passionate lovers. They can do anything to impress their loved one. This is Libra for you.

Peaceful: Librans love to balance so they love to harmonize things in proper order. They do not love arguments and want to maintain silence and calm in their surrounding. They are also known for their kind-heartedness.

Irresolute: Libras are very hesitant, especially if they are asked to make a concrete decision. They are often struggling between diplomacy and biasness.

Librans are endowed with great many strengths which have marked them separately from the others. Librans are wise and honest. They have the ability to maintain balance in challenging situations. They are therefore often found in settling peace between parties.

They have the quality of being just with people and can effectively solve disputes. There solutions are often accepted and liked by people. Libras are diplomatic in nature and will not unnecessary hurt one’s feelings. The strengths of Librans are:

The balanced and well mannered nature of Librans is often marred by their dark side. Although their sign is represented by the balance, Librans remain confused in their minds. At time they can become capricious and turn absolutely malicious, which often take their closed ones by surprise. As a result, Librans tend to lose their close friends as well.

They can take up fights with people just to prove their point. Also they have a nature to retreat rather facing a situation with courage. Weaknesses of a Libran are:

Librans are diplomatic. They have the ability to judge things from different angles and look at things from other’s perspective. They are just and strive to make things right. They continuously try to maintain balance and harmony in their lives.

Librans have captivating charm which people are quick to recognize. They also carry themselves gracefully and often have great taste on things. They are easygoing and people usually like being with them. They also have a craving for social acceptance and status. They would gather people around themselves and would become the centre of attraction.